After a two-year gap, the much awaited finite series ’24’ is back with its second edition. Armed with a new mission and boundless action, thrill and drama, Season 2 promises to be even more stylish and daunting than the first one. At the trailer launch of the new season, some revelations were made.

Anil Kapoor and Surveen Chawla will be seen locking-lips 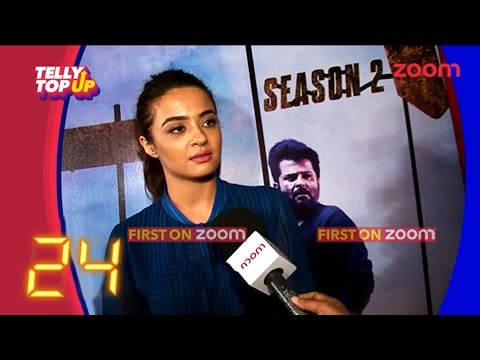 Superstar Anil Kapoor has been pushing the envelope when it comes to season 2 of TV series 24. The actor, who will once again reprise the role of Jai Singh Rathore has done some bold scenes in the film. The actor will be seen locking-lips with Hate Story 2 fame, Surveen Chawla. The lip-lock scene is also part of the promo.

Aamir Khan is not a part of the second season Anil Kapoor’s 24 is known for roping in some of the big names from Bollywood industry From Shabana Azmi, Anupam Kher to Anita Raj, season 1 saw many faces from Bollywood. Recently, there were reports about superstar Aamir Khan being part of the show. However, Anil confirmed the news that Aamir is not doing this season. Anil said, “Well, to be honest, he is not doing the show. If Aamir agrees to do 24 we will need 2 Jack bawers (laughs). I would love him to be part of the show. 24 is a show if someone agrees to do it he has to come organically to the show. If you see all the actors on 24 we play characters. It is not a star driven show.

On Sakshi Tanwar bagging the role over Tabu

Recently, there were reports that Sakshi bagged the role over Tabu because of professionalism and commitment towards her work which convinced them to have her on board. However, Anil Kapoor refused the buzz. He said, “I want to make it very clear Tabu is a brilliant actor and one of my good friends. I am a huge fan of hers. The deal with her couldn’t happen because of the availability and time commitment that I needed.”

Training for the role

Anil has left no stone unturned to give realistic look to the show. The actor, who took help from Rakesh Maria to prepare for his role last year, has this time too taken help from the Cyber Crime team to prep-up for his role.

The actor said, “This time the gentleman, who was given the responsibility to help was Mr. Suhas. Cyber crime has grown a lot. This time I got a chance to meet a lot of people who are now involved in solving the cyber problem. Our cyber capabilities are very less as compared to other parts of the world. I met them and got to know many things. I was lucky enough to meet all of them. In fact, I was a chief guest at one of the conferences where all the people who work for the cyber crime department were part of it.”

Sakshi Tanwar will play prominent role in the second season. Sakshi, who is also part of Aamir Khan’s Dangal, will be seen as part of Anil’s anti-terrorist squad. She is playing a tough cop and Anil Kapoor’s Boss. On the show, she takes over the situation after Jai Singh (Anil Kapoor) goes into a rehab.

24 Season 2 – Karanvir Sharma, Azhar fame to make his TV debut in the show

Sofia Hayat’s reason to turn into a nun, displays breasts implants to the world

Kasam Tere Pyaar Ki latest – Rishi and Tanu to run away and marry?

10 Times Kalki Koechlin Nailed It With Her Words

These Weird Habits of Celebrities Will SHOCK You

Naagin 2 Gossips – Shivanya-Rithik to be blessed with a Baby